Effects of mindfulness-based stress reduction combined with music therapy on pain, anxiety, and sleep quality in patients with osteosarcoma 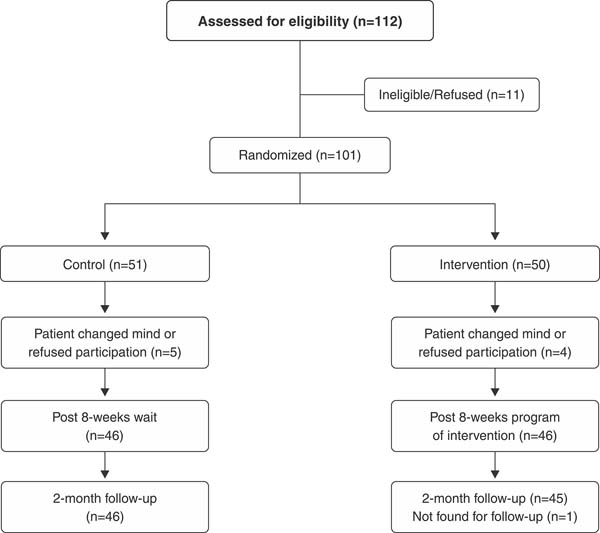 Osteosarcoma, the most common primary malignant tumor of bone, is particularly prevalent in teenagers and young adults,1-3 and its incidence rate is higher in males than in females.1 Osteosarcomas derive from primitive bone-forming mesenchymal cells that subsequently developed into malignant osteoid.4 Even though mortality rates from osteosarcoma decline about 1.3% per year, it is still the eighth leading cause of cancer death in children.2 Currently, most patients are able to avoid amputation due to advances in technology and therapeutic methods in recent decades.5 However, since most patients with osteosarcoma present with metastasis at diagnosis or develop distant metastases, systemic chemotherapy to kill subclinical micrometastatic cells is essential in addition to surgery.1,6

As the tumor destroys bone or metastasizes elsewhere in the body, pain is the most classical symptom of osteosarcoma.1 Even though developments in systemic chemotherapy has improved the 5-year survival rate of patients with osteosarcoma to 70%, side effects are still a major concern.7,8 Therefore, not only the diagnosis but also the treatment of osteosarcoma lead to various biopsychosocial problems in patients.9 Overall, it is important to explore effective measures to improve the quality of life of patients with this cancer.

Mindfulness-based stress reduction (MBSR), a widely used method to improve mental state and sleep quality, was developed by Kabat-Zinn in 1970.10,11 The meditation of MBSR is effective in regulating patients' emotions, leading to reduced stress, pain, and psychological symptoms.12,13 Studies have demonstrated that MBSR has a positive impact on multiple psychological and physical symptoms in a variety of cancers.14-16 So far, MBSR is widely used in breast cancer patients,14,16,17 whereas the effects of MBSR on reducing pain and psychological symptoms still needed to be elucidated.

Music has always played crucial roles in regulation of emotions and facilitating human well-being, resulting in elevated stress threshold and enhanced immunity.18-20 Therefore, music therapy (MT) has developed into another non-pharmacological intervention approach for improving quality of life and reducing anxiety and pain in patients with cancer.21-24 To date, no study has assessed the effects of MT on pain and anxiety symptoms in patients with osteosarcoma.

In the present study, we illustrated the therapeutic effects of MBSR and MT on both psychological and physiological aspects in patients with osteosarcoma undergoing an 8-week combined intervention.

This study was conducted with patients diagnosed with osteosarcoma at Liaocheng People's Hospital between October 2015 and September 2017. In total, 112 participants were screened for eligibility, of whom 101 were recruited. Specifically, there were 35 females and 56 males, aged 10 to 21 years. The inclusion criteria were: (1) ability to follow the instructions; (2) no hearing impairment; (3) no history of psychiatric illness; (4) not currently taking any psychoactive medication; and (5) ability to complete the questionnaires. The study was approved by Liaocheng People's Hospital ethics committee. Then, participants of the same gender were randomly divided into two groups, intervention (n=50) and control (n=51), by a coin-operated method.

We used a combined MBSR + MT intervention aiming to reduce psychological (anxiety and sleep quality) and physical (pain) symptoms in patients with osteosarcoma. For every session of the intervention, MT was first conducted by a professional music therapist for 30 minutes, followed by a course of MBSR guided by a psychologist trained in MBSR according to the contents of Table 1. Then, the participants were allowed to enjoy music for another 30 minutes. Before the start of every intervention, the participants were instructed to rest in bed for 10-15 minutes until their physiological indicators (blood pressure, pulse, breathing, etc.) were stable. To ensure the integrity of the practice, patients were reminded to perform the intervention every day. Pain, anxiety, and sleep quality scores were evaluated before and after the intervention.

Table 1. Contents of the MBSR and MT intervention

Table 1. Contents of the MBSR and MT intervention

Basic demographic and clinical data were collected by a questionnaire designed by the researchers, which included items on age, gender, education level, and surgery status (i.e., receiving surgery or not). According to the design requirements of this study, the psychotherapists were unblinded to group allocation.

Taking into account the age range of the patients, we chose the Wong-Baker Faces Pain Rating Scale (WBRS), originally developed for children by Donna Wong and Connie Baker, to evaluate pain severity.25 The WBRS consists of six pictures of faces, ranging from a happy face representing a pain score of 0 and indicating no hurt to a crying face at 10, which represents hurts worst. Patients can choose either one of the cartoon faces or their written descriptions to describe their level of pain.

The Hamilton Anxiety Rating Scale (HAM-A), developed by Hamilton in 1959,26 was used in this study to assess the anxiety level of the patients. The HAM-A contains 14 items, each scored on a 5-point scale (0, asymptomatic; 1, mild symptoms; 2, moderate symptoms; 3, severe symptoms; 4, extremely severe symptoms). The total sum score, ranging from 0 to 56, can be classified into four levels: 0, no anxiety symptoms; 1-17, mild anxiety; 18-24, moderate anxiety; 25-56, severe anxiety.

The Pittsburgh Sleep Quality Index (PSQI) was developed by researchers at the University of Pittsburgh and is a self-report questionnaire for the assessment of sleep quality.27 The PSQI contains seven components and 19 individual items in a questionnaire, which is widely used by clinicians and researchers. The maximum total score is 21; scores = 8 indicate a sleep problem.

Data were analyzed in SPSS version 15.0 and represented as mean ± standard deviation. Differences between groups were analyzed by Student's t test or the chi-square test as appropriate. Statistical significance was accepted at p < 0.05.

Figure 1. Overall design and flow of participants in each stage of the study.

Download
Figure 1. Overall design and flow of participants in each stage of the study.
Table 2. Patient sociodemographic and clinical data in the control and intervention groups

Table 2. Patient sociodemographic and clinical data in the control and intervention groups

A timeline of the MBSR and MT intervention, as well as the contents of each session, is shown in Table 1.

Table 3. Comparison of Wong-Baker Pain Scale (WBRS) scores between the two groups before and after intervention

Table 3. Comparison of Wong-Baker Pain Scale (WBRS) scores between the two groups before and after intervention

Table 4. Comparison of Hamilton Anxiety Rating Scale (HAM-A) scores between the two groups before and after intervention

Table 4. Comparison of Hamilton Anxiety Rating Scale (HAM-A) scores between the two groups before and after intervention

To further prove that a combination of MBSR and MT is a useful adjunct to clinical treatment in cancer, another psychological symptom was investigated in this study: sleep quality. First, sleep quality was compared between the observation and experimental groups before the start of the intervention; no significant difference was found (Table 5, t= 0.165, p = 0.869). Subsequent analysis by comparison of the PSQI scores in the two groups demonstrated that sleep quality was greatly improved after the intervention (Table 5, t= 6.181, p = 0.000). Comparison of the intervention group before and after the study intervention demonstrated a dramatic decrease in PSQI score (Table 5, t= 6.743, p = 0.000). In contrast, there was no statistically significant change in the control group before and after the study period (Table 5, t= 1.307, p = 0.195). In summary, these data provide further evidence that MBSR combined with MT has a beneficial effect on psychological symptoms among patients with osteosarcoma.

Table 5. Comparison of Pittsburgh Sleep Quality Index (PSQI) scores between the two groups before and after intervention

Table 5. Comparison of Pittsburgh Sleep Quality Index (PSQI) scores between the two groups before and after intervention

Osteosarcoma is the most common and aggressive bone cancer in teenagers and young adults, and is more prevalent in males than females.1-3 In general, the disease was diagnosed in patients complaining of leg pain. The 5-year survival of patients with osteosarcoma has greatly improved with the advent of systemic chemotherapy; however, the psychological and physiological complications can lead to a terribly low quality of life.5,7,8 Therefore, in this study, we designed an interventional experiment to explore a novel approach with potential to reduce pain and anxiety and improve quality of life in patients with osteosarcoma.

Compared with other diseases, cancers are more likely to cause anxiety, sleep problems, and other emotional reactions. MBSR has the ability to enhance the patient's psychological adaptation to the disease, thereby reducing anxiety and sleep disorders.14-17 More and more studies are also demonstrating that music can also have therapeutic effects against side effects of treatment in cancer and can enhance the overall treatment process.18-20,22-24

To date, no study had been conducted on the effects of MBSR and MT as adjuncts to the treatment of osteosarcoma. In this study, we recruited 101 volunteers with osteosarcoma and divided them into an intervention group and a control group to explore the therapeutic effects of MBSR combined with MT in reducing psychological and physiological complications. After an 8-week course of psychological intervention, pain, anxiety, and sleep quality scores were significantly improved.

Emerging studies have shown that MBSR is an effective way to improve quality of life and alleviate complications in several diseases. Studies conducted in patients with breast cancer revealed that MBSR was efficacious in reducing fatigue and other psychological symptoms.16,17,28 Another study demonstrated that MBSR could reduce pain in patients with tension headache.13 Moreover, MT has also proved to be a safe, easy, and effective approach to decrease anxiety, pain, and improve psychological health.18-21,24,29 Taken together, these studies demonstrate the benefits of MBSR and MT for the reduction of clinical complications and improvement of quality of life in patients, which firmly supports our conclusions. Meanwhile, our findings also support the conclusions of these studies and may broaden the range of adjunctive approaches for clinical therapy. We believe that this combined method might be an effective nonpharmacological intervention to improve quality of life not only in patients with osteosarcoma, but also in other diseases.

Many limitations of this study must be mentioned. One, inherent to the research conditions at the hospital where the study was conducted, is the lack of mechanistic observation, which needs to be explored in future research. Other limitations include the relatively small number of participants; the fact that all were selected from only one hospital; and that the sample was restricted to patients with osteosarcoma, which precludes generalization to other populations. The main limitation, however, is the absence of two additional control groups. Many studies have already shown that MBSR and MT are beneficial in relieving pain and psychological stress as adjunctive therapeutic methods, respectively. The aim of our study was to explore the therapeutic effects of MBSR combined with MT on the reduction of these manifestations in osteosarcoma. Therefore, two additional groups (MBSR intervention only and MT intervention only) and a greater number of participants should be included in future studies. Finally, only pain, anxiety, and sleep quality were assessed, while patients with osteosarcoma may experience other physiological and psychological complications. We suggest that further research include additional indicators for the evaluation of quality of life in these patients.

In conclusion, the results of this study demonstrate that a combined MBSR + MT intervention was helpful in reducing pain, anxiety, and sleep disorders in patients with osteosarcoma. These findings provide evidence that MBSR combined with MT might be an effective nonpharmacological intervention to assist clinical care in future.