Patients with Alzheimer's disease dementia (AD) exhibit a progressive impairment of episodic memory and other cognitive functions, which affects functional status.1 In the early symptomatic stages, known as mild cognitive impairment (MCI), cognitive symptoms occur with only slight loss of function.2 Cross-sectional and longitudinal studies suggest that cognitive decline (the main difference between normal aging and MCI) precedes functional decline (the main difference between MCI and AD).3-5 This pattern is associated with the main biomarkers of AD and moderated by several factors, including cognitive reserve.6

Motor impairment may emerge as a phenotype of cognitive decline.7 Deficits in fine motor dexterity are associated with functional loss, and are especially impairing of the basic and instrumental aspects of activities of daily living (ADLs).8 Studies have shown deficits in fine motor skills in patients with AD and MCI.9,10 However, this evidence comes from complex or experimental motor tasks, involving sophisticated apparatuses usually available only in research settings. This type of test is called process-oriented because mechanisms involved in motor control are of primary interest. Clinical assessment of motor impairments with single, user-friendly, and easily interpretable tests, known as task-oriented tests, is more feasible.

Taking into account previous reports of motor impairment and ADL loss in MCI and AD, we hypothesized that motor complications would be detectable in simple, clinically oriented motor tasks, and that motor and cognitive performance might be differently associated with ADLs. The objective of this study was to evaluate group differences among normal controls, patients with MCI, and patients with AD in a simple motor task, and to investigate potential associations with functional performance.

We evaluated a sample of 20 healthy controls, 34 patients diagnosed with single-domain amnestic MCI (aMCI), 32 with multiple-domain amnestic MCI (MDaMCI), and 38 with mild AD. Healthy controls had no subjective cognitive complaint, no history of mental or neurological diseases, and no evidence of cognitive impairment on objective tests or functional impairment according to a clinical interview. Patients were evaluated during 2010 to 2013 at an outpatient clinic, within a major university hospital, that provides specialized investigation and care of memory deficits in the elderly population.

The diagnosis of amnestic MCI was established on the basis of: subjective cognitive complaints confirmed by an informant; objective impairment in neuropsychological tests of memory (aMCI), language, visuospatial abilities, or executive functions (MDaMCI); preserved global cognitive functioning; and absence of functional impairment or mild impairment restricted to complex aspects of ADLs, according to a clinical interview, as described in previous studies.3,11 Diagnosis of AD followed standard clinical guidelines.1 Patients who exhibited active psychotic symptoms were excluded from the final sample. All participants underwent a neuropsychological assessment as published elsewhere, with tests included in the diagnosis process and a complementary protocol not involved in the establishment of cognitive status.11 Diagnoses were established by consensus of an expert board, based on clinical, cognitive, and functional data. All participants and their caregivers (in cases of dementia) gave written consent for participation.

This study is part of a broader research project investigating clinical and neurobiological markers of depression and dementia and their associations. This project was approved by the local Research Ethics Committee and is in accordance with the Declaration of Helsinki. The present study is part of the first author's doctoral dissertation, the results of which have been published elsewhere.3,11,12

Functional status was reported by each participant's caregivers during an interview conducted as part of the neuropsychological assessment, using the General Activities of Daily Living Scale (GADL).12 This measure involves sub-scores of basic ADLs (self-care) and instrumental ADLs (domestic and complex). Higher scores are representative of higher independence in daily life. We developed a scale using the most common ADLs performed by older adults with low formal education and conducted a validation study for this specific population, following the recommendations discussed by Sikkes et al.13 As a global measure of cognitive functioning, we used the total score of the Brazilian version of the Dementia Rating Scale (DRS)14 and a brief neuropsychological battery designed for the assessment of attention, executive functions, language, visuoconstructional skills, and memory. Higher scores in this test represent better cognitive performance. We created a fine motor dexterity measure summing the time of four trials (two with the dominant and two with the non-dominant hand) of the Nine-Hole Peg Test.15 In this task-oriented test, the subject must put nine pegs in nine holes organized on a small board and subsequently remove them, as fast as possible. The test is widely used in the assessment of neurological disorders16 and a commercial version is available.

We analyzed our data by general linear models. To assess group differences in fine motor dexterity, we entered the Nine-Hole Peg test as the dependent measure, the group as a fixed factor, and age and education as covariates. We compared the estimated marginal means by corrected (Sidak) post-hoc tests. The association between fine motor dexterity and ADLs was tested using a multivariate general linear model with the three GADL measures as dependent measures, group as a fixed factor, and age, education, Nine-Hole Peg Test, and DRS total score as covariates. Statistical significance was established at p < 0.05. The partial eta-squared represents the effect sizes for previous analysis. 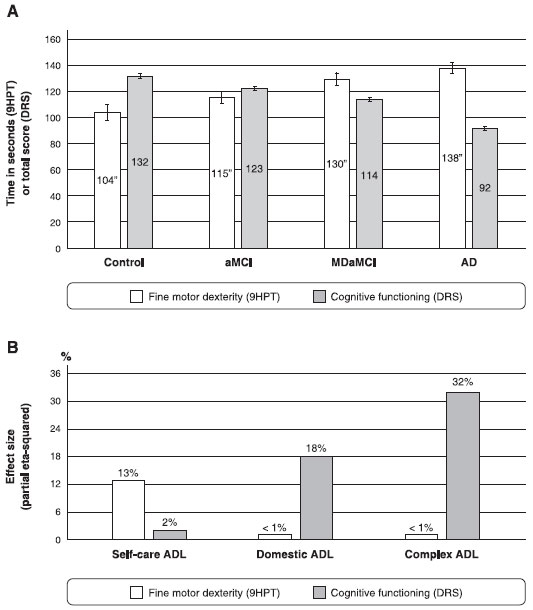 Figure 1B synthesize the contributions of fine motor dexterity and cognitive functioning to each aspect of ADLs. The multivariate general linear models for ADL measures were all significant. In the complex ADL model (F = 23.72, p < 0.001,

= 0.02). Age and education were not significantly associated with ADL performance in this sample (all p > 0.05).

Our results suggest that the intensity/severity of cognitive deficits is associated with greater slowness on a fine motor dexterity measure. We also documented differential patterns of association of motor and cognitive functioning with basic and instrumental ADLs.

Motor evaluation is often neglected in cases of AD, due to the more overt cognitive features included in the diagnosis. Recent data, however, suggest that motor impairment may be a consequence of cognitive impairment.7 Multiple brain regions and their connectivity are essential to maintenance of good performance (speed and accuracy) in timed tasks. The progressive brain atrophy and dysfunction of AD impair connectivity and lead to a widespread range of cognitive deficits.1,2 In turn, this progressive reduction of brain connectivity and consequent inefficient interactions between specific cognitive functions characterize the MCI and dementia stages of AD as a disconnection syndrome.17 This may underlie the slowness in motor tasks found in our study. This reduction may also be a compensatory mechanism to maintain test accuracy (not measured in the current study), increasing the connectivity of multiple brain regions. Using a finger-tapping test, Scheller et al.18 found an increased pattern of connectivity in cortical motor regions in patients at high risk of motor impairment (preclinical patients with the genetic mutation associated with Huntington's disease).

As seen in our results and in previous studies,8,19,20 changes in fine motor dexterity and hand function are associated with functional impairments in self-care activities. A longitudinal decline in instrumental ADLs usually precedes the decline of basic/self-care ADLs.21,22 Although predictors of instrumental ADL changes have been documented,3,4 there are relatively few established predictors of basic ADL decline in MCI-AD. Our results may have important implications for patient follow-up and for the prediction of more severe functional deficits in MCI and dementia.

These results might affect routine clinical assessment practices, e.g., to incorporate specific measures of fine motor dexterity in the evaluation of patients with MCI and AD. Using both cognitive and motor assessments would allow the clinician to compute better estimates of functional performance, as seen in other neurocognitive disorders, such as Parkinson's disease dementia.16 The impairment of fine motor coordination observed in MDaMCI is important from the perspective of MCI-AD conversion.

Our study has limitations that should be addressed. First, its cross-sectional design limits its potential to set predictive models of functional loss. In a longitudinal perspective, we could test whether patients with motor deficits are more likely to experience long-term functional loss. A second limitation is the absence of patients with moderate/severe dementia, in whom impairment in basic ADLs would be more obvious and add variability to our data. We also excluded patients with active psychotic symptoms. This may restrict the representativeness of our findings, as such symptoms are relatively common in patients with dementia or MCI.23

We believe that our results, using a simple and widely available task-oriented test, are sensitive to detect motor deficits in these populations. However, these results should be replicated in a longitudinal design. Participants with impaired motor dexterity may be at higher risk of loss of essential ADL performance, and non-pharmacological interventions focusing on fine motor dexterity may improve performance in these ADLs. If these findings are corroborated, this might allow clinicians to predict and intervene earlier in patients at higher risk of functional decline.